One of the most important sensors on a vehicle that needs to navigate between physical locations is a magnetometer.  Like a person who uses a compass for land navigation, the magnetometer provides a static reference toward magnetic north allowing for movement in a desired direction.  The information from this sensor comes in the the form of 3 orthogonal values that give a representation of the magnetic field surrounding it.  In the following post I will explain its benefits, its challenges and how I use it in my complementary filter.

As I noted in my introduction, the magnetometer provides a static reference towards magnetic north.  This allows us to cancel the gyro drift that accumulates in the yaw direction.  In addition to correcting for drift, it also allows us to be able to navigate with a GPS once we add that to the system as it provides a reference direction to allow us to determine which way to move if the GPS indicates we are out of position.

Below are some of the challenges of dealing with an magnetometer on a flying vehicle.  I will give a short description of each and how they effect the usability of the sensor.  There are a number of good articles on each of these items already available on the web, but this is a quick overview to help present the issues involved.

This is the angle difference between true north and magnetic north.  If all that is desired is countering yaw  drift, then it can be ignored.  Even though the vector does not point toward true north, it will consistently point in a single direction allowing gyro drift to be eliminated.
If it is important to know where true north is, then it must be manually compensate for.  I go to this link to determine the declination close to where I will be flying.  NOAA Magnetic Declination

This is an distortion of the magnetic field that results from the the magnetometer itself or other objects that are stationary to the sensor even when it is moving.  This may include items that are magnetized.  This usually looks like an offset in the results where pointing one direction gives a different magnitude result than pointing 180 degrees offset.  This can be visualized as an offset of the data where rotating the sensor in a circle results in a circle of data that has a center point offset from the origin.  This can be eliminated by adding bias offsets to the sensor results that brings the data to origin.  This is critical in almost all magnetometers to get data that is usable.

This is an distortion of the magnetic field around the sensor that varies with orientation.  It can be caused by objects very near the sensor that bend the magnetic field, such as ferrous materials.  When viewing data from a magnetometer that is effected by soft iron effects, it will often make an ellipsoidal shape when viewed in 3D.  If this effect is minor and the application is non-critical, it may be ignored.  In cases where higher accuracy is desired, a large number of points can be gathered and used to create a 3x3 rotation matrix that will transform the ellipsoidal shape to a sphere.  In many cases this can be ignored if perfect accuracy is not needed and the distortion effect is minor.

Items on an aircraft that generate magnetic fields can be problematic for the sensor.  Wires from the batteries will create magnetic fields that vary with current draw.  Electronic speed controls emit a large amount of electromagnetic noise.  Motors are basically a magnetometers nightmare with very powerful permanent magnets and coils that generate fields that vary with motor load and wires that generate fields which also vary with load and RPM.  Electronic noise generated by one device and travel in the power wires that supply the sensor and effect its readings.  These items can be addressed with a number of measures:

With the above description of the common challenges encountered when using a magnetometer,  we deal with some of them in this implementation and some we will ignore for now.

With this complementary filter we will build off of the structure of the previous Gyro+Accel filter and add in the magnetometer.  Now that we are adding the magnetometer this complimentary filter our sensors have transitioned from pure inertial to what is often referred to as an MARG (magnetic, angular rate, gravity) sensor array.  We will continue to compute the yaw and pitch drift compensation in a similar fashion to as before but now we will also use the magnetometer data to counter yaw drift.  One benefit of this algorithm compared to some other low processing power complimentary filters is that the yaw compensation can be done in any attitude.  The body does not need to be nearly perpendicular to gravity to gain accurate results.

Here is a depiction of the data flow and operations that are performed by this filter: 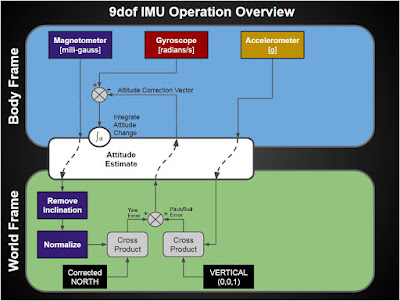 I'm  going to focus on the operations relating to the magnetometer.  Those interested in more detail on the gyro and accel operations should read my last post here.  Having said that, many of the same concepts are being reused.

In my next post I will be reviewing the code I use to accomplish the above operations.  I am in the process of making this into a library that should make adding this complimentary filter to most projects easier and cleaner.  It will also allow higher power micro controllers to use multiple IMU objects simultaneously with very little work.

Please let me know if you have any questions relating to any of the above material.  I will be trying to release post more frequently, but this is an hobby and some times life gets in the way.